Here we have the debut from French death metal outlet, Soulslicer. A quick 35 minutes of groove laden music, many will find their sound a mix of Torture Killer meets Goatwhore- quite thrashy and catchy but still plenty of brutal chops to enjoy. Some of the faster pieces such as the title track and ‘Armies’ have that “Haunting Curse” era vibe from Goatwhore with an emphasis on mid paced speed, throaty snarls, and riffs that sound like a mix between Six Feet Under and Metallica. Not quite death n’ roll but it will certainly hit the spot for those who like their metal with plenty of ‘meat’ to it. The production is clear enough that it doesn’t quite have that old school sound that makes it sound like an Asphyx album, but it doesn’t have that sparkling clear touch that a group like Dark Tranquility would shine either. Somewhere right in the middle which is just about right.

Then there are the other tracks like ‘Radioactive Grave’ that are the slow march type. Very similar to Incantation, but not quite as gritty and doomy, the music drags along like a corpse and certainly gives off that whole ‘zombie apocalypse’ feel to it. Certainly more groove than death metal with a touch of sludge some might argue that the band loses its luster when it isn’t firing on all cylinders with a pit grinder like ‘Forsaken Sanctuary,’ but the slower pieces (which are only a few) bring on a new dynamic for the band and stick a bit more in the head. Even the guitar solos here have some dramatic keyboard backing for more depth. For those looking for an excellent groove death metal piece that is as close to Torture Killer as one can get, the closing ‘Archangel of Atomic Light’ features excellent drumming and thick, chunky riffs that pound almost as loud as the drums. Things pick up towards the middle of the song but overall this is a rather mid paced thrash inspired piece with tons of death metal elements that is plenty fun to hear and a strong closer for the album. Overall, “Pandemic” is enough to stir the thrash and death metal masses for some ripping, yet fun tracks that are sure to create some memorable live moments as this album stomps ears in a groove metal fashion. 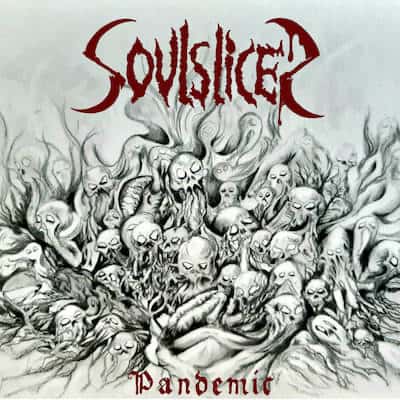