Sublation - The Path To Bedlam

U.S. based blackened death group Sublation has been around longer than some might think. Originally under the name Fisthammer back in 2008, they recently changed names and went on a bit of a hiatus before coming back with a new attitude and vision. A 2 man effort led by Max Svalgard on vocals, guitars, and bass while Danny Piselli is on drums, they used to perform in a bit of a tech death style similar to that of Decapitated. With time and evolution, the band seems to have moved beyond that and fell more towards a more Belphegor related style with their ‘new’ debut “The Path To Bedlam.” Mostly rooted in death metal, one can certainly hear the black metal influences here and there, but overall this album is sheer blaspheming brutality at its finest. There is a lot of groove to be said for the music so everything is quite easy to head bang too, versus some tech death that just seems over overwhelm such as the likes of Origin with its jarring, yet impressive approach.

After a brief melodic intro full of piano and gothic overtones that make one expecting a Cradle Of Filth approach, one gets the heavy hitting ‘Trepanning Of the Evangelics’ which takes the flavors of Vehemence and Belphegor and mixes them together for just some straightforward death metal goodness. One gets a little bit of Decapitated influence with the riffs but the music is very mid paced and a little more relaxed than previous works/ releases. It seems to flow better and has less of that uncomfortable jar or shift, especially when it comes to the solo which flows along beautifully in a melodic black metal fashion. Other tracks like ‘Let The Fire Burn’ with a guest spot from John Norcross are a bit darker and more simple in its chugging nature, a little more Immolation style, but feature some excellent acoustic guitar to mix things up. After this point the album seems to settle more into a mix of mid paced Belphegor meets Decapitated, but the tracks seem to swell together without too much distinction in between. ‘Hypnotic Regression’- even with help from Rocco Minichiello of unknown Italian tech death Release The Blackness- doesn’t have much to draw on when compared to ‘Black Monday’ featuring Dominik Winter of Germany based Caradras which has a very similar sound and feel. Not to say these are bad tracks, but they just don’t really draw attention to anything specific, which is a bit of the album’s downfall overall.

‘The Alchemist’ finally shakes things up with breaking the monotony and injects a ton of melody and groove into it; it reeks of Black Dahlia Murder meets Vital Remains and finally shows something unique to the table. Not just the average blast beat fest. ‘Haunted Shores’ has a very different vibe to it, perhaps owed to the guest guitar work from Tom Geldschlager of NYN, but is still rooted in death metal. And then one gets the breaking of the raft from shore as Sublation finally sheds the guest help and strikes out on a few tracks of their own. The result is a bit fuzzy but one cannot deny that the brutal death metal elements mixed with groove due to the grunts and guitar work from Svalgard carry a large weight of the work, though Piselli’s drumming is in no way unimpressive. Still very Belphegor sounding, but this time one can really hear what Sublation is al about. A little bit less melody and technical, but enjoyable. The guitar work on ‘Eulogy’ is a bit more technical, but even here with the whirlwind of riffs that lend some groove and sound from the likes of Krisiun, one cannot deny this one is pure death metal fun and the best track to headbang to. The closing ‘I Will Show You…’ is a little polarizing because it showcases a lot of melodies and riffs not heard before, giving Sublation a new side of their music that many might wish they had heard more of throughout the album because it finally grabs listeners with the song structure.

A lot of “The Path To Bedlam” just seemed to simmer with the boosts from the guests to really make it pop, but a track like this just really brings thing to life. Hopefully Sublation will include more work like this on future albums to cement their sound as one of the top names in the blackened death metal underground. 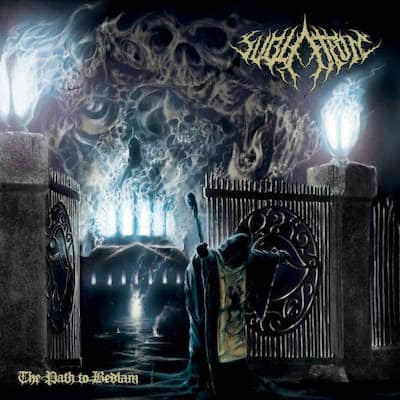