Swords Of Dis - Cor Mundum Crea In Me, Sanctum Ignis

Polarizing and raw would be the best way to describe the EP from U.K.’s blackened doom band Swords Of Dis. Relying heavily on atmosphere and dissonance in a mix of what some could say Funeral Mist meets Deathspell Omega, the band has a tendency to swap between very atmospheric, slow songs and the faster, more typical lo fi black metal style. “Cor Mundum…” capitalizes on the atmospheric tracks that were on the duo’s debut back in 2013 and draws it out, opting for longer tracks, more focus on atmosphere, and more of a metal tone versus the more hypnotic approach that was more ritualistic on the previous album.

Vocalist Alice Corvinus seems to have taken a little bit of a back seat this time, letting instrumentalist Richard Corvinus have more of a heavy hand in the music with also a new vocal approach which seems to be an improvement from the almost sleep inducing vibes that came from the debut. While this EP is nowhere short of wonderous mystical elements, one can say by the 2nd track it is certainly a bit more black metal than doom influenced.

The opening ‘The Great Suppurating…’ sucks one in in typical Swords Of Dis fashion- distorted guitar in Deathspell Omega slowness, backing chants in Latin, thick percussive drums and overall just grim soaked atmosphere. Then we get more into the metal side with the title track which features more harsh vocal work among hectic guitars in lo fi style from Richard, some clean soothing vocals from Alice, but overall a bit more of a frantic, almost out of tune pace that is about as unsettling as a Blut Aus Nord album. So if one likes frantic moaning, abyss screaming black metal mixed with doom, then this will certainly appeal to them and be a wake up call compared to the opening track.

‘Moonlight Illumes Thee’ is more back to the gothic/doom metal area with some of the black metal elements but overall showcases Alice’s vocal talents much better compared to the two earlier tracks and also on the debut album. The contrast of harsh and clean vocals seem to give Swords Of Dis more dept and dynamic, pushing them out of the more drone/ doom area, even though the raw production and how the guitars are in the forefront tends to shroud everything else so the orchestrations can be a bit harder to hear. The closing ‘In the Fires…’ brings back the atmosphere focus and pretty much voids the metal factor although the haunting choral tones and somber guitar adds heaps of atmosphere. A little bit on the slow side some might consider it an outro or filler compared to some of the other tracks, but it actually sounds cleaner and less chaotic without all the distortion.

Ultimately this EP is a bit of a preview of what is to come, and it sounds like a nudge in the right direction for those who felt the debut album from Swords Of Dis was a bit too lulling. While the production value and dissonance is a bit of a turn away for those who are used to lush sound of the likes of symphonic black metal, those who like the more chaotic stuff such as Deathspell Omega or Funeral Mist with a little less harshness from the vocals will find this album enjoyable, mysterious, and a bit frightening. 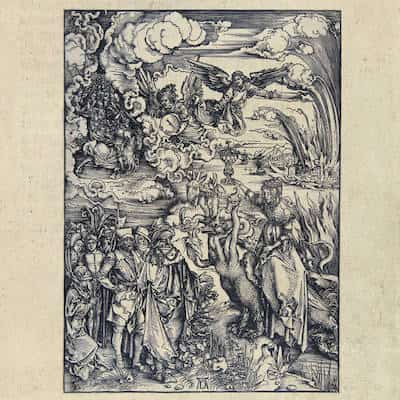 1• The Great Suppurating Wound Of Dissension
2• Cor Mundum Crea In Me, Sanctum Ignis
3• Moonlight Illumes Thee
4• In The Fires Of Man, We Are Destroyed