Texas Murder Crew's 2020 debut EP, "Everyone's Last Breath", was a huge deal for the underground brutal death scene upon its release. The EP showcased a fresh take on the genre with its annihilating drumming, sickening vocals and heavily praised in general for being Devourment's own Kevin Clark's latest project as he brought his guitar and backing vocals skills into the mix. An online prescence had built enough hype and hope for TMC that an album to follow was sure to devastate further.

With a split EP shortly released beforehand, the debut album from the band, "Wrapped In Their Blood", hits May 2022 from the brilliant Comatose Music label. Instantly, there are noticeable differences between the album and the EP; New members are introduced as it appears the band have had a complete refurb to their sound. Whilst the prime guitar and vocals remain the same members, the rest of the team are somewhat, confusingly scattered. However, not always a negative aspect as these new members tend to bring their own innovation to the game.

Whilst the vocalist remains the same, there's a clear indignation of the band testing new waters and essentially becoming less "brutal" as such. Whilst these vocals are still gritty and inhuman, the gutturals and lows from previous material have become watered-down and these styled vocals presented here are more prominent within the realm of deathcore than say brutal death. The slamming guitars that are more defined within Devourment's own material is lacking here, as the band display a more grinding and faster paced direction, often entering hardcore domains with Terror styled gang shouts to back up this new bidding.

The clear picture from the album showcases the band trying to write actual songs rather than heavy hitters just trying to be as disgusting as possible. And whilst that is definitely a positive, they may have slightly misguided their older fanbase. The deathcore anthem of 'Pareidolia (In Splatter Patterns)' is a highlight from the record, as it reveals how hungry the band are for change and diversity within brutal death, especially with their sneaky approach to having a massive breakdown at the end that carefully avoids the slam genre. Texas Murder Crew show no signs of slowing down as the album's sinister artwork is as menacing as they come, definitely more threatening than their track title of '3 Feet Deep' - which is a much better song than actual song title. The album's theme of horror and murder is revealed with haunting samples placed across the record, ending with the piano infused entry of 'Wrapped In Their Blood (Part 3)' - becoming the band's most diverse entry to date.

Arguably not the band's strongest material so far, but still something punishing to come from a great label that ultimately reveals fresher elements from an overcrowded genre. The album has hints of all kinds of directions around the metal globe, and that's the brilliance between adding new additions to the band whilst keeping their intense formula of barraging riffs and blast beats galore. Texas Murder Crew are a band to keep a strong eye on, as who knows what direction the band will head into next - further adding to their curriculum of diversity within brutality. 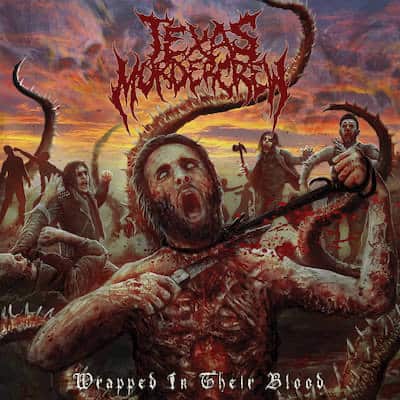