Toadeater are a post black metal band from Germany and “Bexadde” is their third full length album. Only 4 tracks it seems like more an EP, but the band has been pushing their epic boundaries ever since their debut, and here the felt less was more with some of their longest tracks to date. The album may seem like it will be quick, but it is not. For most post black metal fans, a lot expect either otherworldly dissonance with ambient and industrial touches (like Dodecahedron) or chaotic, suicidal music mixed in with quiet orchestral bits (like Ghost Bath). Toadeater are more like a mix of Dodecahedron meets Deafheaven (without the shoegaze influence) with a touch of more recent Ghost Bath and Wayfarer and create a solid black metal sound with post metal influences. The opening ‘Asche’ pretty much sets the tone for Toadeater with the chaotic tremolo picking and throaty, hellish vocals. Like Ghost Bath, they truly sound tortured and raw, but a little less strained and not ‘trying to hard.’ They are unsettling, as they are meant to be, and fits the music well. There are some dissonant chanting cleans added in too but not much room for any quiet or ambient moments. The music just pretty much carries on the whole 9 minutes with some mid paced moments that are a little more post rock/ metal, but overall it is a freight train of harsh black metal. Other tracks like ‘Let the Darkness Swallow You’ is a little slower, a little more post metal, but the vocals have that extra Ghost Bath torture note to them, which might turn off a lot of listeners with how pained they sound. However, Toadeater display a wonderful show of chaotic black metal with some post metal drumming the last quarter of the track, delving more down the Dodecahedron route.

‘Lowest Servant’ is probably the most atmospheric track on the album. Leaning heavily towards the monk/ choir chant side of post metal, the music is a bit of more of a mid paced trekker. It is still black metal but a bit more melodic and less dissonant. Here we get more of the organic musicianship from the band, despite the hellish vocals that clash with it a bit. Finally the grim ‘Molten Gold…’ brings back the chaotic black metal factors with the dissonance which buries a lot of the music and some of the more ambient elements. However, it is still melodic despite the harshness with thunder samples, long drawn out chords, and almost a more doomy presence than the other tracks. The vocals here are a little bit more tolerable and should sit well with a lot of the listeners. A grand 13 minutes to close out the album on a strong note.

Ultimately, if one can sit through a Ghost Bath album, then Toadeater should be an easy listen. While the vocals are the harshest thing here, the instrumentation is less dissonant than a Xasthur album, and less haphazard than Deafheaven. The epic proportions of the music might take some getting used to, but “Bexadde” is so far Toadeater’s best work to date with a display of solid, unconventional black metal that stays way from the too orchestral or too kvlt for a modern success on the genre. 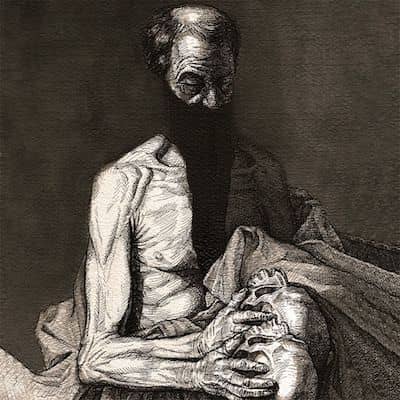 1. Asche
2. Let The Darkness Swallow You
3. Lowest Servant
4. Molten Gold (Down Your Throat)