Associated with mighty Gods and bloodthirsty warriors, old tales are being spoken again by the Danish band Vanir, formed in 2009 by music loving metalheads with a viking melodic folk metal sound the group has since released five studio albums, beginning with a demo in 2010. "Jörgmungandr" was quickly followed up by "Særimners Kød" a year later. When the pandemic hit the band was ready to record the album "Sagas", the album is the latest part in the route together with Aldar Rök and Allfather. With already a lot of historical and ancient tales of warriors and mythology yet also adding Tolkien’s stories that fit in line the band has a lyrical interest in the past of Europe and some fantasy tales. Being the sixth album of Vanir these people already have a lot of experience writing and recording music so lets listen where they have been up to.

'Day Of Reckoning' is the first track on the album, the songs first minute a a build up to the Danish metal chaos unleashed, with chopping drums and melodic guitars, the different elements and the atmospheric changes is the song make it a true killer to begin with on any viking metal album. After the vocal interlude a changing in bpm is occurring this doesn’t only solidifies the song but also shows the musicianship of Vanir in general, after hearing the first song I’m only getting more interested in the rest of the album.

'Black Clad' is a whole other song than the first one on the album, although possessing some melodic elements it is a more straight forward piece of music. The vocals are also certainly playing a bigger part is this song with more chanting a growling than in 'Day Of Reckoning', infusing a warrior like state. The underlying bass riff is also an important part of this song ensuring a steady base for the guitars and drums to play upbeat and to groove in the different parts of this track.

'Æresstrid' is one of the tracks that I liked the most on this album, beginning with melodic blast beats the tune is already set in this song, the vocals in the Danish language are also one of the things that was very interesting to hear because I can understand English but not Danish (Dansk). It will only leave oneself asking where they are singing about guessing with my little knowledge of the language I might think the title means something like honor battle (I hope I am right). Again the melodic guitar riffs are not polished but more raw and cold than in the other tracks on the album also following the vocal melodies in some parts. The drums are beginning as I already mentioned with a melodic blast beat but after that they keep a steady course throughout this track only to once again ending with the same rhythm they began with in the first place.

No song is the same on Sagas, this is one conclusion I can make about the album. Though they are all in the same path in one way or the other they're all unique in their own way yet still fitting the Vanir style of playing. Melodic is what I can call the most of the songs but yet there are also some more upbeat and atmospheric tracks. The one thing that is also making the diversity happen is that some of the songs are sung in the Danish language adding more possibilities to explore vocally. Speaking about the vocals, the growling is very good but it is the only limited to one certain range in the songs sometimes they are getting higher or lower but not vert much in my opinion, I think that using just some more range would only ad more dynamics in the tracks and will benefit the band. The overall sound on Sagas is a steady and pleasant one, raw energetic with polished yet also shredding and cutting parts, one can hear that Vanir is making music for a long time and I hope they will keep continuing. If you are interested in viking metal be sure to check out these Danish warriors. 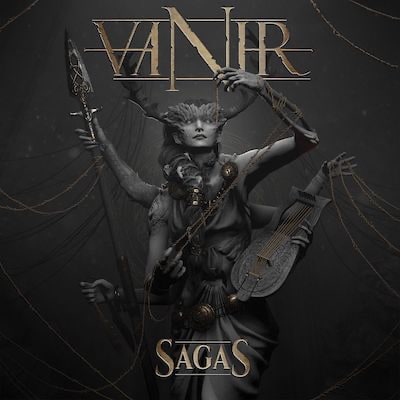