Vidres A La Sang hail from Spain and have been crushing ears since 2004 with their style of blackened death metal. A mix of epics and shorter tracks, their fifth full length album “Fragments De L’esdevenir” may seem like a bit of an EP with only 5 tracks to spare at barely 30 minutes, but the band continues down the same path they started on (read my review of their "Som" album here). Just going back to basics a little bit to their earlier song structures which sheds the epicness just a little bit and lets the vocals do quite a bit of the work for a darker, more sinister approach to the genre. For those who are new to this group they sing complete in Catalan which is a dialect from Spain so translations might be needed. However, from the opening ‘Mort de parula’ one can tell this isn’t going to be the typical Dark Funeral or Khold follower. The icy tone of the riffs is there but they are almost more gothic metal with their deliver. The riffs deliver the first few minutes of the song somewhat repetitively and then quiet down for the vocals to take over. These spoken snarls are very effective on their own and certainly menacing before the more black n’roll style riffs come back in with the drums. The music feels very restrained, but very effective. Then there are the heavier tracks that are more the typical blackened death metal style with faster paced drums such as ‘Salveu-mes Els Ulls’ but still tinged with gothic melody here and there with the vocals being the standout feature between the snarls and whispers. Riffs again tend to be a bit repetitive and doesn’t quite feature as many twist and turns as a Deathspell Omega album might present, but the sound is very solid and enjoyable across all the black metal sub genres.

‘Ventres De Illum’ is a little bit of a filler track but carries the same harrowing atmosphere that the opening track did. Again letting the vocals do most of the work, the guitars carry their somber repetitive notes over and over while the vocals howl in raw painful fashion; this is more like ‘Blood Red And True Pt. 3’ from Leviathan style- very minimal but then again sometimes less is more. Then we jump back into epic territory with ‘Fins Aqu’ which has percussive drumming, restrained guitar, but overall still carries a sort of prog death/ black n’ roll style in mid paced to slow fashion. One of the more epic tracks it tends to carry on a bit and get a bit more chaotic down the road but tries to stay as consistent as possible. The closing ‘Ara es dema’ continues down epic territory with the doom metal driven riffs. Vocals are still pushed to the forefront but it comes across as more of a morose death metal track than black metal, especially with the driving bass. There is a bit of a lull in the middle of the track before things pick up again which adds atmospheric effect, but with the repetition of the riffs they tend to wear a little on the ear despite the great production and overall haunting pace.

Ultimately this album is a bit different for the average black metal fan. Taking the somberness that might heard in slower depressive black metal tracks and mixing it in with a bit of the groove from more black n’roll with a touch of gothic, the band shows how a 3 piece doesn’t need grand choirs, extreme speed, or heavy distortion loaded with dissonant riffs to create a good metal record. It may seem a bit stripped down with just vocals, guitars, and drums but the songwriting delivers something a bit more. While most are used to typical Sargeist or Satyricon delivery with minimal instrumentation, the somewhat gothic blackened death rock metal sound that is certainly groove laden and hides the language barrier of the lyrics because it just sounds so interesting. “Fragments De L’esdevenir’ is a nice balance of harsh and melodic even if it does come off a bit short timewise and leaves listeners hungering for more. 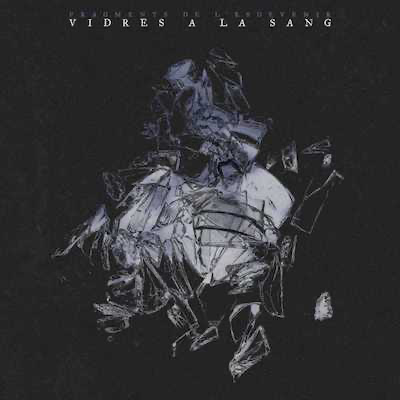