Mysterious bands are always fascinating, be it in the way the band members present themselves, the concept of their music, or the music itself. In the case of Vidres A La Sang the group has taken a language called Catalan, supposedly a strain of Spanish, and weaved their music around it.  The music itself is very engaging; it has the fantic speed of black metal and the crunch of death metal, with touches of creepy ambience to keep the listener on their toes. Combined with some deathly scary vocals, Som is a dark journey that will please almost any death metal fan.

The first thing to notice about Som is that it is epic. "Som" opens up with a doom metal riff before a very ambient keyboard section comes in with the vocals growl over like some demonic priest giving a sermon. Then, the drums and blastbeats kick in with the guitars and the song just takes off from there. There's a few black metal riffs thrown into the mix that try to drown out the vocals, but they stay sharp and evil all the way through. The ambience picks up again in the middle, creepier and even more mystical than before with the vocals before going back to the metal riffage. Expect a lot of this throughout the album. "Policromia" is more of a straight up mid paced death metal track that churns it way along with speed laced drums and the brutal death metal vocals. As said before, they are groweld in a different language and are unintelligible. "Esclaus..." is still pretty brtual death metal, but the keyboards are mixed in the background amongst the chugging riffs, bringing back a bit of the atmosphere heard on the first song. "A'lombra" slows things down a bit, especially around the two minute mark where the band forsakes the blastbeats and riffs for some string pickings which is even more eerie than the keyboards. There's also a nice solo here too before the death metal fury comes back in. "El Crit" is not unlike the second or third track in the sense it is more death metal than ambient, but the riffs are superb and the drumming is enough to get anyone's head banging. Vocals are brutal as ever and cut a perfect swath through the ear, in a good way. "No Tonare a Ser Jove," the longest track on the album, offers one more ambient surprise for the album: badly done piano. When I saw badly done it sounds like some psychotic person is raking their nails across the piano and about to do something disturbing. It's extremely effective in the sense of the band going for a more horror like death metal than brutal death metal. It is perfectly fitting because the listener is drawn into the music and then BAM, the death metal comes back at full force and makes one jump. Before the song winds down there's some quiet guitar work with the keyboards that make for an excellent closer.

Altogether, some fantastically well done ambient blackened death metal. The songs are a bit long so it takes some focus to get fully engaged with the music. Fortunately, the brutality never lets up and the music is varied enough to keep that attention. Som is a good piece for metal fans to contemplate, or just rock out to. Fans of EA, Deathspell Omega, and other twisted acts like early Vital Remains will find this another gem to add to their collections. 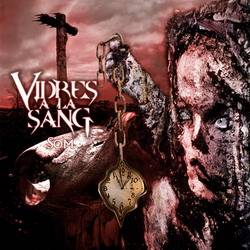