Vivisect’s latest slab of old school death metal isn’t really anything new, but rather a compilation of what they’ve done so far since their inception in 2019. This New Jersey based group have a demo and EP out so far with 1 split and give fans a rather rare glimpse at their work in cassette form only (so far) on Nihilistic Holocaust in a gritty, packaged deal. It is only 4 songs so barely 20 minutes worth, but enough to give new listeners an idea of what these guys are about. Listeners who have followed them since the beginning will only want “Barbaric Death” if they are avid cassette collectors (which is making its way back into the world). Like the format it is in, expect late 80s/ early 90s style of very early Deicide meets Incantation with somewhat muddled production but some brutal grooves, especially with the opening chugs of ‘Prison Planet’ from their EP. It has a somewhat doom laden vibe to it but picks up pace with the riffs and drumming later and once can definitely hear the “Legion” influence. Slightly melodic but still brutal. Other tracks like ‘Order Of The Solar Temple’ have a thicker pulsing sound with the drums, guttural vocals that are a little bit muddled and buried as the bass and guitars seem pushed up in the front, but the whole recording process feels very live. And of course the groove is still unmistakable.

‘Rat Torture’ churns along with some slightly repetitive riffs, but it doesn’t quite become too much of a bore once the solos come in. A little less vocal heavy, this one gives listeners a chance to enjoy quite a bit of the drum sections which just hammer away almost in a thrashy, Vader-esque style. Finally there is ‘Extraterrestrial Proliferations’ which has a bit of a different sound to it than the others. More stripped down, more garage sounding, once can get more of very early Exhumed or Immolation here at a rather slower pace. Almost more of a sludge death metal piece, this one drags a bit but sounds the most varied compared to the others, even when it comes to the solos. While the quality is a bit rougher (especially in the vocal department) this track from their split album is probably the highlight of the album. Overall, older fans aren’t going to find anything new here, but new fans who like gritty old school 80s/ 90s death metal will find it appealing even if the vocals are very hard to understand. There is a lot of potential here listeners just need to hear more of it. 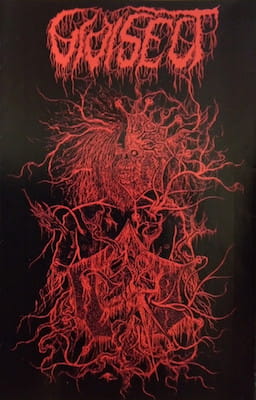