Written In Torment is one of those unknown bands that have been around forever, but tended to lurk just below the radar of notice while still being prolific in releases. With 4 full length albums under his belt now, England’s blasphemous Leviathan (not the be confused with U.S. based Wrest of Leviathan) dons the blood and corpsepaint again for another anti Christian onslaught of black metal with “Black Command.” Only 6 tracks of impurity, Written In Torment is a bit like a mix of Funeral Mist meets Mortualia. The music is icy, the lyrics burn the soul, the album artwork is blasphemous, and yet very melodic at the same time. Rather than take the typical Dark Funeral or Marduk approach, Leviathan uses a mix of harsher riffs and a rather marching, mid paced tone when it comes to a track like ‘Anger Road.’ It trudges along through the snow (or ashes) with pretty clear production so the drums, bass, guitars, and vocals can all be heard clearly. As the album stretches on better examples of how Written In Torment can stretch the black metal limits by adding in epic 8 minutes tracks with ‘The Allure Of The Dark’ with backing keyboards for a bit of a gothic overtone like some of the faster work from Siebenburgen (without the female vocal additions) to go for more of a melodic black metal approach, although after a while using the same riffs over and over without too much variation of the drums while the vocals carry on tend to wear a bit more on the ear, and the acoustic additions from a track like ‘Anger Road’ tend to be missed a bit.

‘Mors Ultima’ is where things get interesting. While bands like Funeral Mist have their choir and church samples to drive the effect of their uniqueness, Written In Torment adds a bit of Viking flair with the vocals. Shedding the harsh snarl, the clean vocals are an instant grab for listeners along with the backing choirs for a much more dramatic experience. And with the way the guitars and drums are arranged it almost feels more like melo death versus melodic black metal, or black metal at all. Other tracks like ‘Black Command’ make more use of the clean vocals, although they are more choirlike versus a Viking chant, and while the faster pace of the music tends to betray the softness, the epic track hits hard. Here the vocal roles are reversed as the clean vocals get more time versus the harsh, but it works to great effect and probably stands as the highlight of the album. Finally there is ‘Dies Irae’ which is like a more condensed version of the previous track. Still very ferocious in the drumming along with the riffs, the soft vocals balance out the harshness with the unclean vocals cutting right through in their evil snarl and backed by the darker, slower riffs here and there that seem more dramatic when the clean vocals come in. They are even layered at times, but the clean vocals always seem to have more effect than the harsh ones and bury them just a little bit. There is even a bit of piano added to the mix with the acoustic guitar which begs the question why wasn’t this added in to more tracks, even as a brief interlude, to add more depth and diversity to the music?

Overall, while ‘Black Command’ is the shortest album that Leviathan has done with his solo project, it is potentially the most refined and impactful. While it doesn’t scream layered vocals three times over like Funeral Mist or slowly bleed with raw, hateful distorted energy like Xasthur, the music here is controlled, features a few entertaining surprises to keep listeners holding on, and doesn’t drag on too much to warrant any quitting of the album early. Written In Torment is hateful and dark in a more delicate manner, avoiding the typical harsh kvlt route of being as mean and tremolo picking and fast as it can be and rather going for a more melodic, almost depressive route sometimes, but never relenting in its quest to be a mockery of the cross even if it is subtle and missed by even the most hard headed of black metal fans. 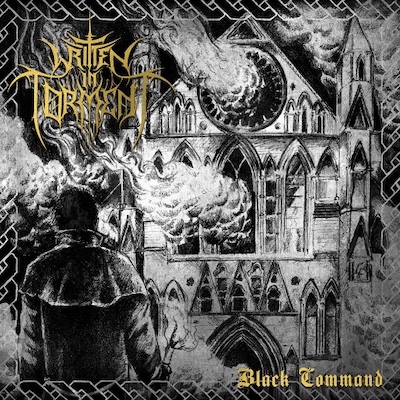