Xicution - For The World Beyond

Almost 8 years after their first album, Germany’s death groove group Xicution is back with their third full length. The album is full of plenty of heavy hitting riffs that sound just at home on a Six Feet Under or Torture Killer album with some Cannibal Corpse mixed in, so expect quite a bit of a 90s/ early 2000s death metal sound from these guys. Xicution mix things up enough though rather than try to create just a run of the mill death metal album. Opening with the ominious samples of ‘World Demise,’ “For The World Beyond” is grim, haunting, and hooks you right in with the screams and sounds of bodies being dismembered (or eaten). ‘First Kill’ kicks things right off with a mid paced chugging track that sounds right at home with “Gore Obsessed” Cannibal Corpse with the mix of groove and brutality. Vocals tend to seem a little drawn out and slower than the rest of the music, much in the vein of Torture Killer and tend to be a little one toned, but still there is enough here to keep fans interested or not feel like they are being run over by a freight train. “Decaying Entrains” adds more varaiety to the drumming, but keeps with the groove elements. Here we hear the guitars start to take their darker tones and melodies so Xicution starts to show more of their unique qualities versus the second track which is kind of a just the staple death metal track but doesn’t really bring anything exciting to the table.

Xicution tend to add curveballs here and there, such as the shorter tracks like ‘Fear The Living’ which mostly features muffled vocals, moaning zombie samples, and dark guitar single picking which really amps up the atmospheric elements and leads into the highlight track of the album which is ‘Whisper In The Dark.’ Much slower, much more of a different approach for the group the slow chugging and simplistic rhythms are more doomy and deathcore driven; some listeners might hate it but others will appreciate the difference, even if it is just the one ‘oddball’ on the album. ‘Slaughter To Exist’ slips back into the standard Six Feet Under death metal territory with groove laden chugs, deep crackling growls and more of a mid paced snarl, but like some of the earlier tracks doesn’t quite feature that ‘wow this hooks’ factor. Thankfully ‘Taste Of Sin’ brings that back out with a dark haunting instrumental much like ‘Crossroads to Armageddon’ by Six Feet Under. Slow, and again a less brutal death metal approach but definitely helps the album stand out.

‘Cannibal Instinct’ brings things back into explosive faster death metal territory showcasing a little bit of thrash in the mix with one of the heaviest tracks on the album. ‘World Beyond’ follows suit with more heavy riffs but still plenty of groove and rough vocals, though with the snarling it tends to be harder to understand versus the deeper growls, but overall serves as a solid death metal piece. Finally the album closes on another sample instrumental track of ‘Chaos Arise’ which seems to finish out the zombie cannibal holocaust story. While it doesn’t make the album end on a roar versus more a subtle hiss, it brings things full circle with the dark undertones of the opening track. These little interludes are nice breaks for the album and help deliver a sort of story versus just a straightforward 30 plus minutes of non stop death metal. For those who like their style of metal heavy but mid paced and not too repetitive, then “For The World Beyond” is definitely worth checking out. The wait time was worth it for old fans of Xicution and new fans are still going to be slayed by this album’s dark delivery. 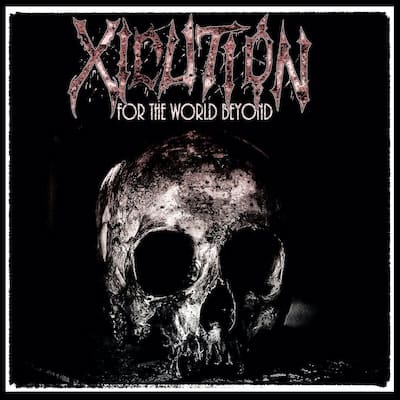