A Gruesome Find - Of Blood And Nobility

I must say they did. Their black metal is woven with death metal which leads to aggressive and heavy songs. They also add some minor Viking elements into the songs. The structure of the songs is changing frequently while there is room for melody and groove. Catchy and repetitive riffs that are backed up by double bas blasting drums. Most of the time the tempo is on warpath but they have breakdowns to mid paced parts. Also the interlude and the piano sonata are embraced switching moods. With "Of Blood And Nobility" the band delivers a nice piece of art that should be picked up by a label soon. 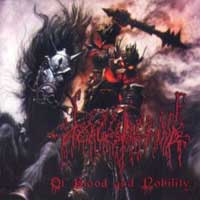 Self released
Reviewer: twansibon
Feb 26, 2009
Next review: A Gruesome Find - The Fire That Burns In Hell