Abaddon Incarnate! Make no bones about it. I love em! The boys and my own band go way back and have shared a stage many times and its always an absolute pleasure to do so i am somewhat biased to the them. So i review this album as a fan with nowt but the utmost respect. Cascade is the lad`s fourth outing and marks their debut on Metal Age Productions. It is also worth mentioning that it`s new member`s Steve Finnerty on bass and Johnny King on drums. I say new guys very loosely as they have been in the band a considerable length of time at this stage. The album also marks new territory and a new chapter for the band, not only with the new members but also, its the first recording without the finesse of the late great Miesko Talarczyk of Nasum fame at the knob-twiddling helm, having greatly embraced the Nasum sound in the previous two albums.

Lets not fuck around, their album "Nadir" to these ears, is a jem and a milestone in the bands career but i often feel their work since, always gets compared to it. The following album, "The Dark Crusade", which i thought was good, kinda slipped under the radar but also i think marked a bad patch in the band`s career. But again, got compared to "Nadir".

Cascade, although still very much in the grind vein, revists some more death metal influences not really heard since debut, The Last Supper. The Nasum and even, Rotten Sound connection is still very much apparent however there are early death metal influences in the mix taking inspiration from the likes of very early Morbid Angel, Entombed, and Dismember. I like the way on the recording there is the odd solo rip but nothing too over indulgent. Just a big rip to break the tracks up here and there and it sounds cool.

The guys used, like alot of bands from the island, Trackmix Studios however attempted to recreate the old filthy grinding sound of yore  though i do feel although its close but its not quite there. The sound is too clean but i believe but thats just me knit-picking. The drums sound absolutely killer in the mix and and cut through beautifully. Johnny blasts the shit outta the senses here and doesnt let up for one minute. Its the best drums have sounded on any A.I. album. The bass cant really be heard in the mix but whenever it gets its chance to shine through, it bulldozes your ear drums. I think i would of had a pinch more bass in the mix just to stink it up abit more but hey fuck it!

Vocally, main A.I. front man Steve Maher is in fine fine form reminiscing of the early Dave Vincent years of Morbid Angel and delivered with such anger and hatred. Backing Steve M on vocals, is Steve finnerty and Bill Whelan on high vocals but it is Steve finnerty that can primarily heard shredding his vocal chords to absolute maximum effect. Live, it looks fantastic with all three roaring their tits off, its just so damn intense! The album has a range of lyrical themes touching on subjects of Torture, Occultism, Murder and Pagan-like demons and gods. The cover, which embraces the torture theme, looks terrific.

Now with any given A.I. album theres always the stand out tunes, Nadir`s was "I will nail you in", The Dark Crusade`s was "1756", Cascade offers some proper angry fuckin` tunes. Choice cuts for myself would be opening salvo "Strappado", "Altar Of Scum" and "Harlequin". The last two being beyond catchy!

Dont kid yourself, this is one fuckin` aggresive album. Nadir it is not and i wish people would embrace that but such is life. I think what lets this album down slightly is its production in that they have slightly fallen short of achieving that real filthy crusty rusty chainsaw sound (yep, they even use the ol swedish favourite - the boss heavy metal pedal and maybe the ol metal zone) but its all good still! I look forward to hearing new recordings of Abaddon Incarnate which i believe are in the pipeline for a split which could be quite special so i eagerly await. Grind fans make sure you give this a listen as this will be right up your street but death metal fans dont dismiss this as strictly grind cause there is a bucketload of death metal in there too for all you d.m fans. Filthy and down right heavy but room for a pinch more filth? Go on, have a listen, i think you`ll fuckin lke it all the same! 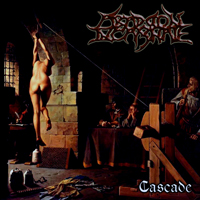