This is heavy/thrash from Bangalore, India, originally released way back in December 2014. Following its intro, the opener ‘Terror In The Eyes Of God’ heads up the thrash hybrid, with a heavy reverb effect on the vocals. Stylistically, the thrashier elements sound like some of the original UK bands from the late 80’s, the more metal influence, comes across as 90’s metal, the way it was done then. That being, quite muddy and compressed, but still enjoyable.

The straighter thrash numbers like ‘Violent Sage’ and ‘Bullet Eye’ hit the spot, a touch like old Toronaga, with that ever present dulcet guitar tone and there are a fair few ripping fretboard assaults to sink your teeth into also. Overall, the songs are cool, the presentation and recording is much like a demo recording, but this doesn’t kill the sound, but there is obviously more opportunity possible in a different studio to really expand these songs, they do sound very compressed as I mentioned earlier.

I would imagine from their location, this would work well and critically it is a decent effort, I just fear that it sounds a little too dated in the current climate, but the style and bare bones talent is clear and present. Worth checking out, hopefully more material will surface as I would be keen to hear some further development, if not more in the production more so that the song writing. 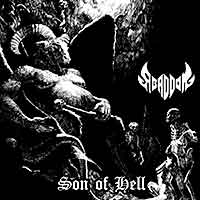