Gore grind from Germany. Short tracks with the typical grind vocals: not understandable, haha. Drums that are on speed (drummachine?) covered with guitarriffs that cut to the bone. Like the tracks because they vary on speed. Songs begin with spoken intros of German and English. The songs should have been a little bit longer because it looks like some songs where cut off while it could have continued. Fans of gore grind should visite the site and download the tracks. 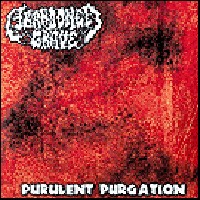