Brazil seems a country where brutal death metal is a real art. Again we have a nice fucking band called Abantesma. On this 2004 demo we find 3 songs in a very addictive brutal style. Gurgling vocals, neckbreaking riffs with good leads and the drummer who is playing with creativity. Songs that are fast with even faster accelerations and mid paced parts. These three songs are lurking for more and it seems that they released a new demo in the end of 2005. Cool demo!! 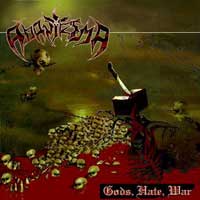 Self released
Reviewer: twansibon
Feb 26, 2009
Next review: Abantesma - The Plague Against Them