This split features New Jersey’s Abazagorath and Pennsylvania’s Blood Storm, who have been active in the black metal underground since the mid-nineties. Formed in 1995, Abazagorath is named after the spirit of hate for mankind; with such a christening you know precisely what to expect from them. Taking inspiration from the darkened atmospheres created by Emperor and Darkthrone at the start of their careers, Abazagorath channel them into a formula involving melody, extreme license, violent intensity, and an endless sonic landscape of cold darkness and pure malevolence entirely unique to them. This latter quality is explored to the fullest in their lyrics, which take the listener headlong into a journey into long forgotten realms of the underworld, presented at frightening levels of rage and dread. Having begun around the same time, Blood Storm (the brainchild of guitarist/vocalist/frontman Mezzadurus) delve into the forbidden occult sciences of the Atlanteans and other ancient societies, revealing their archaic practices and overwhelming desire to reclaim the Earth through brutal black/thrash metal heavily inspired by old school legends like Possessed, Necrovore and Bathory. If you’re a longtime fan of this band, you know they approach their subject matter with a high modicum of scholarly dedication, proving that metal requires the intelligence of the mind as well as musical prowess. This split is an accurate representation of both bands. 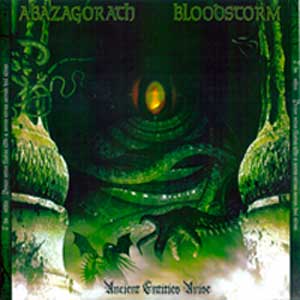