Abbas Taeter is a new sinister creature from Mancan and he is the guitarist and vocalist of the Italian black metal band Ecnephias. On this debut Mancan got the help of members from the band Ecnephias, Obscure Devotion and Valkiria and the album is released by his own label Fauno Extreme Art.

On "Infernalia" you are treated with 10 tracks in a mixture of old school black metal and gregorian chants. The songs are divided in real songs and interludes and atmospheric melodies. The album starts with the chants, sung in Latin and followed by a fast attack, this time sung in Italian. "Vetusta Abbazia" shows the integration with twinkling riffs, choir chants, growls, melancholic breakdown, intensity and up whipping rhythms. A rich song so to speak with more than 6 minutes playtime. Abbas Taeter finds a good combination between the rougness, brutality and the melancholic atmosphere. Track 3 is also a song that thrives on occult conspiracy. But "Hiemis Sevitia" is an intermezzo with classic guitars and baroc singing. And this changement will continue to the end. "Real" songs changed with atmospheric and suggestive chants.

With "Infernalia" Abbas Taeter shows the ability to make some interesting sounds. Although I find all the interludes with the chants a bit too much. But the "real" songs have enough tension to tickle your mind. 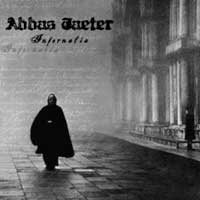