This is a compilation of earlier material all in one place, including the ‘Vulgar Necrolatry’ demo, the ‘Abhorrence’ EP, live and rehearsal tape material, hence the reason why you will see some tracks repeated. The essential premise of this band is pure old school death metal, somewhere between General Surgery and Obituary, and sandwiched between this is the haunting tunes of Purtenance and Nerlich combined. However, these are not merely influences, Abhorrence have been around since 1989, so I am sure they were active when the likes of those mentioned were also digging up graves and slaughtering souls with deft, aggressive and authentic death metal, gore and all.

When you go for magical tunes, take the first four as an example. ‘Pestilential Mists’, Caught in a Vortex’ and the bone crushing ‘Holy Laws of Pain’ are immense and this is deeply rooted in filth and slime. ‘Disintegration of Flesh’ picks up the speed and drops some timing occasionally and this essentially completes the ‘Abhorrence EP’. When you get to the ‘Vulgar Necrolatry’ demo, in particular the title track, I realise there is not much difference between the sound of the demo and the released EP, which is great! As a listener of many old school bands, I find great pleasure in reporting the authenticity of this material. Although, the live material, as expected is of poor sound quality as it actually sounds like someone has recorded the material in their pocket, but hey, at least you get the complete picture.

Finland’s Abhorrence are death metal purists, their material still sounds relevant today as it would have done when recorded, this compilation is a great chance to hear a great band from a vintage age. 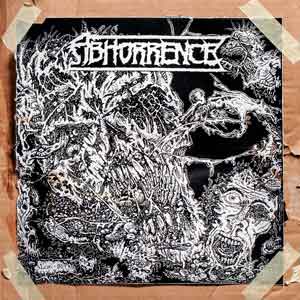