New beast on the block. Yep, these guys here were formed in 2013 and after a promo of 2014 they release this one. "Entity Of Malevolence" is their first full length and it will definitely fulfill any stomach out there craving for chunks of violent brutal death metal. 10 songs and a total length of 33 minutes pretty much sums up all their malevolence. The songs are tight and about 3-3:30 minutes each, and that helps a lot as they sound cohesive and direct. A big plus for a death metal band, and Abhorrent Deformity seem to know that well.

The album starts after a short intro raging, full on blast beats and fast tempos. Heavy guitar riffs and a growler that rips his throat off at will. The boys come from USA and this is clear on the first note spilled from the speakers. This heavy sound that binds fast and relentless blast beats with mid tempo "slammy" interleaves is I believe a trademark of the American scene. Will bring a lot in mind bands as Dying Fetus and Misery Index when they start to groove it up. In their most relentless time youíll find Disgorge and Pathology. Just pick one. I'd say that the boys tried to combine all of them in one. I am not sure though that "tried" is the exact word cos this music seems to come out natural. So I guess all these are hard boiled influences used to create an amalgam of heavy and brutal death metal like the ones every brutaler likes to listen to.

Their music is not one way to brutality of course. The mid tempo parts are having a loud presence there as long as the slam parts giving the whole outcome a nice diversity and of course all that wrapped under a perfect production and mixing process. Loud,fat and dirty but on the same time clear as it should be. A really interesting piece of xtreme death metal that leaves no one untouched. Of course the xtremity in music goes along with the one in cover and lyrics. Brutal art and some of the most deranged and demented song titles and lyrics fit to a perfect package for the brutal ears out there. Excellent debut from those fine American gentlemen. Word! 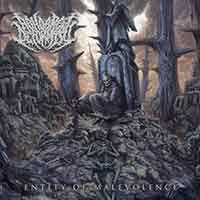