Really slow, really heavy and really loud -- but not so loud as to destroy the bittersweet melody of the background keyboards that sugar-coat the heavy guitars, bass and drum crashes, the growling vocals that tell tales of heartbreak and sorrow and not to suffocate the chord-changes and song structure which are sophisticated by metal standards for sure.

Listening to Ablaze In Hatred is to embark on a an epic adventure in depression -- a lot like life really -- which is why I like this kind of music. They use enough keyboards to be compared to a goth-metal band like My Dying Bride or Draconian but "Deceptive Awareness" is a death doom album for sure, more akin to Swallow the Sun or Katatonia. than to a funeral doom band such as Bethlehem or Ahab (a band that I reviewed a couple months back). They are not unlike a funeral doom band, just not as atmospheric and sound-scapish and slow -- it's slow but not that slow. Let's just leave it at that. 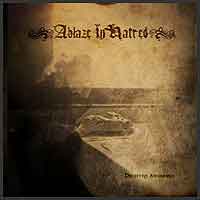 1. Lost (The Overture)
2. When The Blackened Candles Shine
3. Howls Unknown
4. Constant Stillness
5. Ongoing Fall
6. To Breathe And To Suffocate
7. Closure Of Life