Even when you dn't know this band you get an idea what they do when you see the artwork. Yup, it is brutal and devastating. Abominator is around since 1994 and now in 2006 releasing this new 8 tracker. Expect raw and dirty black death tunes with raspy vocals. Tempo of the songs is full ahead (with few breaks) and leave no room for experimental touches. Guitar riffs are constant in the front row with some leads. All is sounding heavy, tight and compact but the problem is that the album has not enough variation. I mean it is spreading blasphemy all over but when you played it a couple of times behind eachother it is sounding a bit monotonous. I know the band doesn't give shit about my opinion but I would like to hear more diversity. 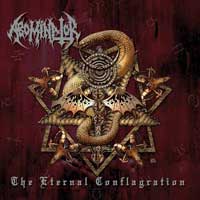