Russia’s Aborted Fetus have a new release out entitled “The Art of Violent Torture” and it is nothing short of absolute madness! Gut-wrenching brutal death metal with all the ingredients to satisfy the nearly insatiable cravings of anyone into this type of metal. These guys have been around since 2000 in various incarnations, and in 17 years they are still perfecting their craft of unrelenting torture and devastation. Despite only 1 minor glitch in this release, Aborted Fetus have done a damn fine job providing us with the next sermon in the continuing quest of spreading their disease.

The riffs are pretty much traditional with a grindcore edge played simplistically with a vibe of things technically implied at the very core. Fans of Brodequin, Autopsy, Cancer, newer Obituary, Bloodsoaked, Origin, and other similar bands. You can tell a lot of though and care was taken with this aspect of the music. From what I could tell, the drums were not triggered. The drummer has fantastic endurance and precision throughout the album. There’s nothing too fast, but the material is played with tons of passion and that takes great endurance! The blast beats and double bass on these tracks are absolutely amazing. The bass was a little low for my liking but with all the other awesomeness going on, it more than makes up. More low-end rumbles would have sent this release right over the top. The enunciation of the lyrics wasn’t too good where the vocals are concerned so I couldn’t follow along with the lyrics, but this is a release where the sloppy sludginess of the vocals made it even more agonistic. This guy has a very demonic set of lungs on him. This was the only real “glitch” on the album, but I think I am beginning to understand why some vocalists are choosing such vocal ranges and patterns on their release and I am trying to appreciate these things more.

This was a great release overall, so fans of this band should definitely pick up this release. They keep the insanity flowing without a hint of disappointment. Aborted Fetus are another unstoppable machine under the flag of Comatose Records and are a band that will not compromise nor conform. They are here to devastate and destroy and if their 17 years together isn’t a testament to that fact, then put this album in your stereo and prepare to be sonically annihilated! 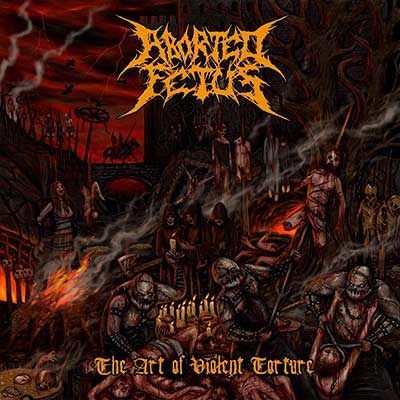