Past the aptly titled opener Armageddon, which immediately makes one realise it is indeed a different world he is now wandering in, an ominous Charles Manson addresses one’s welcome to this 4th full length by Italian/Norwegian act ABORYM, Generator.
Reknowned for their electronica meets the best of the coldest Northern black metal sonorities, these Latin chanters return with an album that is doubtlessly ABORYM. That is the crude sound characteristic of black metal since its inception at its crux, yet redefined through the more synthesized use of actual technology.

Some changes to the winning formula are present, most notably the change of line-up. First off, out goes Attila to concentrate on MAYHEM, in comes Prime Evil, known for his guitar work from MYSTICUM. Out one star, in another, as if the exchange was supervised by Satan himself, since the crossover is as seamless as only two long-serving and experienced demons from the deepest circle of the abyss could handle.
Secondly and most notably the addition of a real drummer in flesh and blood for the first time in ABORYM’s career, no one less than Faust of ex-EMPEROR fame, making Generator. consequently sound more in your face.
Moreover, to the ear yet unschooled to the entity named ABORYM, Generator is also arguably more metal. Yet this is discussable, as while on one hand the songwriting leans sufficiently to a more brutal bashing approach to make it harder for ABORYM’s electronic followers to digest, on the other, closer headphone listens reveal such a deeper use of electronica spread across a 3D mixing, that it is safe to say that had Satan been a sequencer, then he comes through in disguise. And this is the true essence of ABORYM - they are just one word and it is all their scope – danger!!!!
Indeed as the samples all make one envisage only a taste of their pure Satanic essence. Just like Eve presenting the apple, it is man who chooses to sin. “Omnia Est, Malis Est”.
Indeed, as the video game sounds ABORYM throw in for good measure are no game at all, rather they represent the Kali Yuga age we are all entrapped within, hence a grim warning that the end of our planet is near.
And what counts is that ABORYM attack so cunningly that one cannot miss how strongly, at their 4th full length, they STILL sound primordial and hungry to infect the world with spite.

I say this as if there is an album that summons the feelings of those entrapped within the Twin Towers as they saw the aircrafts bring upon them the death they could not escape from on that one day known as Sept 11, it is Generator. In specie the diction by which Prime Evil excels to spew out the ABORYM message on the closer I Reject, inexcusably the voice of Satan on earth without reserves!!!
As we daily witness masses without identity influenced by anything from some nicely written comics to religious leaders’ quotes, farce upon farce is luckily cleansed upon by ABORYM, the culprit mongrels in the backyard of Rome, supposedly the epicenter of Christendom yet in itself a generator of “Omnia Est, Malis Est”.
Period. End of review. Buy before Armageddon takes over! 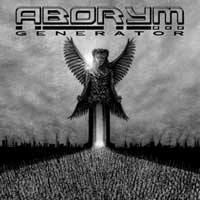