Abrasive was founded by Ralf (git/vox), Alex (bass) and Alexander (drums) in 1999 and a half year later already released their debut MCD "Victim". In 2002 they released their 2nd MCD "Desire" before they were signed to NTEY Recs. For the label they only recorded "Devotion" and in 2007 "Awakening Of Lust" saw the light. A new album with old school shit from these horny sex-hungry German deathsters! 9 tracks of rotten, mostly mid-tempo brutal death metal in the style of old Asphyx & Pungent Stench. The music flows pretty easy and every song has a variety of rhythms, from groovy beatdowns to full blastbeat explosions & thrashy parts. There’s a slight problem with the sound, ‘cause it’s a bit blurry & bassy, but that shouldn’t keep you away from checking those guys out! Not really original, but they got the fucking spirit….. and that’s the thing I might say!!!! 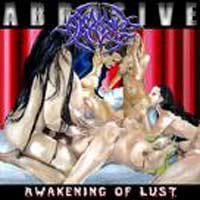