Abrogation are a melodic death metal band from Germany that combine the melodies of Hypocrisy influenced death metal and the catchy aggressions of a thrash metal band like Demonica to create their music. Having been around since 1995, they've taken their time between albums to get better and better, and with their fourth studio album, Sarggeburt, they've reached their peak yet again. The guitar melodies are better than ever and the vocals still kill with understandable quality. The music is still raw and true to the formula of making death metal short tracks, but within those few minutes each track is full of excellent solos and catchy drums moments. It's very hard to dislike an album that tries to do everything right.

Sarggeburt opens with the title track which features a funeral synth before launching into the death metal style. The guitars are the backbone of the song because they perform so many different melodies and they range from depressing to catchy. Vocals are a mid ranged growl that don't sound overproduced and fit the tone of the music perfectly. The drums keep up the whole time and contain everything in the midpaced chug that Abrogation performs at best. Of course, some tracks on the album are faster than others. "Wechselbalg" is a bit more aggressive and furious than the most, sacrificing melody for pure, crushing power. However, the instruments are given the key role while the vocals hang back a bit and allow lengthy interludes from the guitars to really show their stuff. In contrast, "Hans Eisenbeiss" is a very different side of Abrogation due to its acoustic sound and the use of clean vocals. It may sound like an oddball but it is beautifully arranged and adds a whole new depth to their music. There's other acoustic moments at the beginning of other songs, but not as profound as this. For the most part, this album stays within its boundaries as far as melodic death metal goes.

Fans of Old Man's Child and Crypteria will find this a treat due to similarities and musical pace and melodic note placement. While most of Abrogation is sung in German and the other two in English, the music is so good that the lack of lyrical understanding will seem small compared to the big picture. This is certainly an album to get energized by, even if the pace of the music tends to stay the same. Some may complain that a band tha keeps too little of a pace variation can burn out a listeners' interest quickly, but Abrogation's new album performs enough melodies to keep the earhole rooted to the speakers. The more melodic, the better. 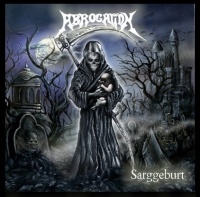