On this split release of Finnish label Bestial Burst you find two bands ...mostly on a split release...). Abscess always will be known as the band of ex-Death member Chris Reifert. Abscess is playing mid tempo raw death metal. These 4 songs are from 2002 but still enjoyable.

Bloodred Bacteria comes from Germany and is blasting in full gear. Straight, heavy and direct in your face short songs. Lyrics are shouted in the mic, guitars are heavy riffing and the drummer is abusing his kit. 4 Nice furious death metal tracks. Although track 7 (written in Japanese caracters and not available on my OS, haha) is really wrecking your nerves... 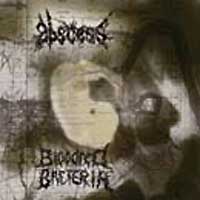 1. Thirst for blood, hunger for flesh
2. Doomsday inside my head
3. Maldoror
4. Beneath the skin