Ofcourse the band Abscess needs no introduction but I will give you a short one. Founding members Chris Reifert and Danny Coralles were also founding members of Autopsy while Reifert also played in Death. This is their 7th full length and this time it is released on Tyrant Syndicate. This label is run by Darkthrone and signed a distro deal with Peaceville. On this album you hear 12 dirty punk death metal songs. They are up tempo or are mid paced and still have that punk groove rhythm and that filthy guitarwork of Reifert. Abscess will never reach the cult status of Autopsy and Death but that have their place in the extreme metal scene. 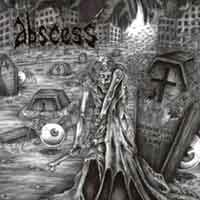