The history of Absenta (Spain) is going back to 2001 when vocalist Alkaudon and guitarist Agui decided to start a new band. Other members were recruted from Aguis last band and so Absenta was born. In 2002 a keyboard player stepped in to make it more melodic black metal.

After line up changes Absenta recorded a debut MCD in late 2007 with 5 tracks. The songs are indeed melodic black metal and played in mid paced tempo with some fast parts.
Vocals are throat rasping and spread a cold fog above the sound. The guitars are riffing and some melodic solos. But the songs are going up and down in safe tempo. And with safe tempo is that they are really aggressive in the fast parts and in the slow parts they could be more emotional and atmospheric. Listening to these songs II think the band is just beginning. Nowadays they have a new guitarist and so there is hoe for the future. Listen to the two track on their MySpace account and judge for yourself. 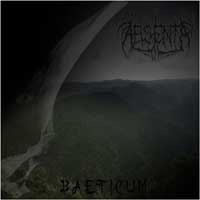