Absenta - Under The Sight Of Mulhacen

Absenta are a black metal band from Spain and 'Under...' is their first debut album. It isn't the typical tremolo pickings on overdrive with continual blastbeats and shrieking vocals compared to most black metal releases. In fact, this album can be considered somewhat groovy and slow/ mid paced. "Rebellion Awakening" is one of the few furies that are heard, but even it has its well set pace. Partially this is due to the vocals which croak and snarl along like Deathspell Omega; sometimes this may feel like it ruins the music because the music in is one gear and the vocals in another, but the atypical sense makes it a good anomaly.

"Southern Hell" is a great groove oriented track that is layered within the riffs of the guitars. "Deserter Human Legion" is more of a chugger, relying a bit on death metal formulas, but the riffs have heaps of melody involved that makes it a standout track. The only 'generic' black metal track involved is "Swallowing Pure Shit," and even the title/ lyrics don't seem as intriguing as as track like "Above The Crags." "Eurasian Pest" seems a bit controversial, but is by far the best track on the album with its lengthy ambient interlude and symphonic elements along the croaking vocals, which sound more effective when they're not doing the usual snarl. It is a great blend of heavy and soft elements and doesn't take away from that evil aspect that black metal presents itself so well.

This is a good place to enjoy for the average black metal fan. It delves between the traditional and more symphonic/ melodic side of black metal but doesn't lean too much into one specific category, so in a way it appeals to a broader audience than a band like Khold or Satyricon would. Not really for purists, but for those who like dark music with a bit of groove in it. 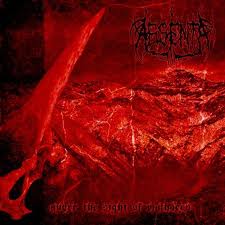