Do you like Dutch death metal and Sinister in patricular ? If the answer to this question is yes then you definitely should check out Absurd Universe. Because this band's line-up consists only of current Sinister members. Behind the mike is the notorious Aad Kloosterwaad (Sinister, Supreme Pain, Infinited Hate etc.) and his partners in crime are Mathijs Brussaard on bass, Bastiaan Brussaards on guitar, Dennis Hartog on guitar and Toep "Stabath" Duin on drums (the last two guys are also in Putrefied).

"Habeas Corpus" is Absurd Universe's debut album released via the Italian label Punishment 18 Records. What you'll find on this CD are eigth tracks (plus intro) of furious straightforward death metal. Absurd Universe have more simple, in-your-face approach compared to Sinister - their music is pure death metal mixed with some heavy doom passages here and there. The tempo is fast and neck-breaking but you will not hear any grinding blastbeats coming from the drums of Stabath. The guitar riffs are tight and with powerful sound, at places you can hear short outbirsts of speedy leads. Above all are the furious vocals of Aad but there is no surprise here - his voice is well known among the death metal fans all over the world. Tracks like "Blood Collector" or the opening "Freedom Less" will surely cause you a severe neck pain at least for a week. So in case you are hungry for some high-quality oldschool death metal then don't hesitate and give an ear to this raging album. Absurd Universe will not disappoint you! 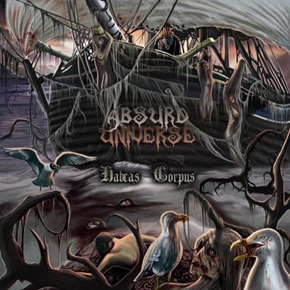