Acaro - The Disease Of Fear

2011 erupted with the release of the debut album, 'The Disease Of Fear'.  Since the album's blossoming, the band have recently been offered a support slot on a tour under legendary metalcore heroes, Killswitch Engange and Shadows Fall. The question at hand is why have I never encountered Acaro before?

If you're not a fan of the metalcore genre, do not throw this band aside. Despite the fact they are definitely stuck with the metalcore tag, the band cleverly input several hints of thrash, and even death metal elements within this short lasting, yet igneous album. The eight tracks provided are of careful structure, blasting out technical riffs with intense screams powering over the instruments. Breakdowns are not thrown in at every verse like some bands in the genre would attempt, and this becomes something I actually really enjoy about the album, even though I have nothing against bands playing breakdowns.

Memorable, and favourable tracks for me would be 'Throne Of Blood' (mainly for the awesome breakdown halfway through). 'R.O.J' is another favourite, using a more diverse outlook on the genre, almost sounding like a progressive metal band rather than a core band. 'Forever Is Temporary', the final track, boasts via intelligence, and surfaces to be an exciting end to the album. If you're a fan of the UK band Malefice I think you'll love Acaro just as much, especially with the help of melodic hooks and a modern stylish production. 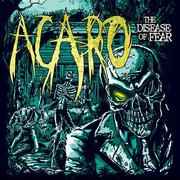