After almost eleven years of disbandment, Greece's Prog Thrash attack Acid Death have decided to reform and show the world they're still genuinely Metal. The third effort to date, 'Eidolon,' is possibly their best release as far as keeping up with the idea of 'Progressive Thrash;' it is not the typical speed chug rhythms over and over again mixed by a solo and backed by a harsh bark of shouting. Instead, it is more of a mix of Death Metal, Thrash, and Technical Groove Metal altogether that shifts and changes constantly by still includes a solid rhythm all the way through so listeners can follow without feeling lost in the chaos. The opening "Blind Reflection" is mostly instrumental but really gives listeners a preview of what the rest of the album will be all about. The vocals tend to switch between the harsh typical Thrash snarl but also deepen a bit for almost a growl, though not as audible- this can be heard clearly on "Towards Hate." Other tracks like "No Sky Above"  aside from the 'echo effet' on the vocals at some points, the music also feature a fast pace mixed with blastbeats that sound more Death Metal influenced than Thrash. The rapid chugging of interlude sections bring back the groove, and even better the bass can be heard in a semi-technical fashion as opposed to being lost in the mix.

Of course, Acid Death do keep a few tracks in the mix that herald back to their original Thrash roots. "Odious Maggots" may seem a bit dry compared to the ever evolving style of the other tracks with its reptitive 'three good riff' formula aside from the melodic solo, but the raw quality of the music will certainly make Thrash purists happy. The closing instrumental "Sole Truth" carries the same weight that the band opened with, only this time one can hear the melody a lot more clearly in the closing solo section with the riffs being infectiously addictive in the way that Torture Killer can be despite repetition. Overall, fans should be happy alone that this band has returned to the fold, and new fans who like their Thrash mixed with Death Metal in a way where the Thrash sections actually dominate the Death Metal this time will find Acid Death's sound appeasing. It's not mind blowing, but it doesn't put past or present to shame with the legacy that the group has had to live up to, no matter how short. 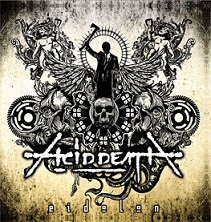