It’s been 18 years, a damn long time since I last bought and listened to Acid Death from Greece, in fact I wasn’t even aware they were still going, so when this popped up for review, I was intrigued. But rather than compare directly to past material, I have gone at this from a fresh perspective. They still have a hybrid sound, death, thrash, progressive, Acid Death are still a little hard to pin down into one style, but the refreshing nature of the production is a good start for one.

Every now and again there are some 90’s industrial rearing itself, a nice touch, especially as it’s not continuous throughout the album. The energy that some of the chord structures in the verses complement and enhance a strong vocal delivery with an almost machine gun battering occasionally from the drums. The band get the balance right with the sometimes clean melody driven vocal lines (the album has a fair few vocal guest spots too) and the hammer blow that almost figures with Devin Townshend, early Fear Factory or Messuggah in places, whilst combining standard melodic death metal and thrash grooves.

It may sound a mash of styles, but there is a consistent level of maturity and quality behind each track that’s clearly been thought about. It doesn’t some contrived or processed and the album gives a good account of a band that been around the block a few times, there’s still relevance and life I this mythical monster yet. ‘Hall Of Mirrors’ is a strong release in keeping with their chosen field. 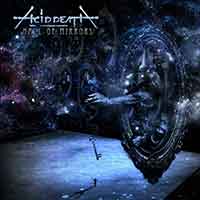