This is a Greek doom band and this debut release is available for free download at their band camp site or available as a nice digipack version for those who want something tangible. Who wouldn’t really as this is pretty consistent throughout. The first couple of tracks remind me of late 90’s Cathedral, it has that little bit of groove, that little bit of dreaminess and Alex Koutsis’s vocals remind me of some of Lee Dorrian’s dulcet renditions. ‘A Deaconry to Vanity’ and the next track ‘Oracles’ have a further dreamy soundscape that actually reminds of the latest material from El Caco. However, it is not until ‘(Dona Eis) Requiem’ begins that the doom element and the feel of the album picks up thus cements its journey into competent and thought provoking sounds of terror and at the same time, creating a safe haven through consistency.

The jewel of the album is the closer ‘Whitewood’ which is very much, to me anyway, similar to recent British doom bands like Serpent Venom and the faster moments of Witchsorrow. In summary, it’s a true doom effort! The only gripe would be that not all the tracks are as immediately likable as this, but it is perfect to end this release in terms of running order.

This is a pretty decent release; it does take a couple of listens to get it as upon my first listen I was quite unsurprised. There is no really stand out tracks to contend with the exception of the closing one ‘Whitewood’ as mentioned earlier, however, it’s not something that you can really grumble about. ‘Visions of Burning Aeons’ remains rooted in classic doom and groove, there are thankfully no secondary influences like keyboards overtly overbearing the mix with this music, it is basic, to the point and rather appealing. 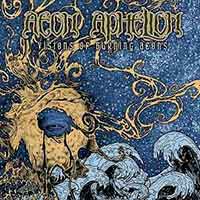