Aftermath - There Is Something Wrong

Aftermath were formed in 1985. Back in 1994 Aftermath had already a strong presence in the metal scene mixing old-school crossover thrash and technical/progressive metal. Their debut album "Eyes of Tomorrow" that was released that very year (but was recorded in 1990) is an underrated classic. Their previous demos are impressive and deservingly were re-released. Their second full length album falls like a storm in the desert, enters like a wolf in the flock of sheep. It is in their style, and it is a commentary on what is wrong with the world today. A calling out to the masses to wake up and get to know the real enemy. The music is dynamic and aggressive, while the lyrics challenge the listener to seek the truth.

Aftermath's second album comes out 25 years later and it's a concept record. In Kyriakos words: "The concept is about the real power ruling the world. Not the elected officials who are only actors or puppets. But, the ones no one knows about. Their hidden agendas. The wars they create. The lies misinformation. The system that is built to deceive us from birth through school. The religious and science nonsense they teach us to control us. The battle ultimately is good vs evil and evil is winning. The record also gives ideas on how to overcome them. It list events that people called conspiracies that were later proven true".

'Can You Feel It?' intro sounds like a mix of TV News, speeches and riots. It sets the mood right for the opening track 'False Flag Flying'. The song is so highly energetic that it would move a dead man. After the first half of the song the open chords become more chaotic with the double bass to soon change to a Rage Against The Machine riff and lead guitar part. "There's so much you don't know. Know your enemy" and then "Never trust your governments. Spreading fear. Debt is here. Slavery. Apathy. KNOW YOUR ENEMY", and then again "Fly high avoid the radar. Avoid the radar. Being a slave. And yet not knowing you're a slave. Without chains. Everything you know is a lie!" Kyriakos vocals are convincing, ironic at times and manage to deliver the message and bring forth the feeling of fear and that there is actually something wrong.

'Diethanasia' is the first single of the album that got an official video. A classic old thrash/crossover song that sets off with the drums and a thick riff over a wall built by the bass and drums with some super speed vocals added in and with the chorus singing "Diethanasia, from then Black House" as a break. The structure of the song is excellent and deservingly was the first single although the album is full of diamonds.

Inbetween songs there are some skits using vocal samples. This is an excellent idea of Aftermath to deliver the message and they use it brilliantly for the album's benefit (remember this is a concept album).

'Scientists and Priests' deals with the hypocrisy of science and religion ("Opiate Of the masses"). The elite that controls us use religion and technology and pharmaceutical to achieve further control on the masses. The vocals of Kyriakos here show agony, fear and anger. There are so many emotions suppressed. All the things we don't understand and take for granted since childhood have to stop. "They lie about the lies they lied about". The riffage is heavy as hell. The atmosphere is thrash/crossover with hardcore elements and the lead part is Pantera driven.

'Smash Reset Control' is a 3 minute adrenaline bomb featuring some excellent riffs in the old school hardcore/thrash vein! The government is not legitimate. You need to take action! Take control in your hands and understand you know shit! The system is a scum and you're a fuckin' slave! In the Messhugah motto "Destroy, erase, improve"! The song is a mixture of D.R.I. with Dead Kennedys, Napalm Death and Slayer and that's a killer mix enough to start a riot. "Too much shit. Get pissed off. Lose Control. Forget the law. Break the law. Smash Reset Control." Try watch the Official lyric video.

'Gaslight' intro is almost industrial. The message is that propaganda rules the world. There is no alternative. Where do we stand? Aftermath want the listener to think, not just listen. The riff is Slayer mid period influenced. There are many syncopations and rhythmical changes from marching drums to classic thrash that increase the tension and wake up the listener. Some rhythmical patterns in combination with the spoken word of Kyriakos brought to mind Ice-T and Body Count. There is a lot of soul and emotion put in this album and this is captured in every single song.

'A Handful Of Dynamite' is an interlude featuring some distorted vocals, samples and industrial noise breaks with lead drums bombing over the scenery. A voice says in Greek "Υπάρχει κάτι Λάθος" "There is Something Wrong" which sounds rather sick over the acoustic guitar. "The governments do not operate the way you think. Banks do not do what you think they do. The police department is not there for what you think it is. Nothing works the way you think it does".

The wishpering vocals serve excellent to introduce the next song. 'Temptation Overthrown' atmosphere is Suicidal Tendencies meets Rage Against The Machine and Slayer. The many years of pain hatred. Life becomes a joke. We are exposed. We must fight. A hymn to rebellion.
It really is impressive the way Kyriakos uses his voice and the variety of expression he offers. The backing vocals are also excellent.

'Pseudocide' countdowns over recorded samples. "Governments do not operate the way you think they do". The governments are puppets on a string. They follow orders. Can't you feel something's wrong? They lie. Continuously. And forever. Brainwashing is their technique.
They spread fake news to control the masses. The song starts somewhat acoustic to evolve to another dynamite. It is an excellent idea indeed to use distorted vocals inbetween the riff. Aftermath manage to deliver the fear. The breaks with the acoustic guitars and backing singing vocals in the end of the song brought to mind even Faith No More. There is so much variety and open mindness in the album.

'There Is Something Wrong' is the penultimate track of the album. The internet is a modern means of captivity and enslavement. Everything works for the benefit of companies and organizations while you think you are given control, you are actually losing control. The hypnotic guitar theme with some acoustic sounds on the background underlines the sickness. Technology is a whirlwind. No more logic, no more life, no more feelings. Everything is manipulated. So confusing. Nothing is true. Some vocal parts in the end of the song reminded me Dave Mustaine's narratives in Megadeth. The way Kyriakos says "There is something wrong" is of ultimate despair. Another excellent song!

'Expulsion' outro is an industrial/experimental piece just before it gets to an avantgarde theatrical song of desperation and agony for the future. They lie. They deceive mankind. Can you feel there is something wrong? Υπάρχει κάτι Λάθος...

Aftermath chose not the easy path. Instead of releasing a conventional record, they chose to make a concept album for their comeback. At the age of internet scrolling they chose to deliver a message. Making a concept album in our days of youtube and mp3 where many people don't bother to listen to a whole album like in the past, but just check out songs instead, Aftermath's decision for a concept album definitely needed guts! Aftermath wrote an album for the devoted, for those who need a message in a record.
"There is something wrong" may sound an "easy" title, but it is the ONLY title that could summarize the message and fits perfectly.
"There Is something wrong" is a difficult album.
It is a concept crossover tech thrash/progressive metal album.
It is an album you need to listen in its entirety to understand it and feel it! 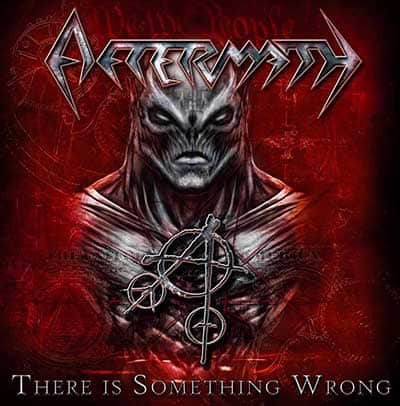 1. Can You Feel It?
2. False Flag Flying
3. Diethanasia
4. Scientists And Priest
5. Smash Reset Control
6. Gaslight
7. A Handful Of Dynamite
8. Temptation Overthrown
9. Pseudocide
10. There Is Something Wrong
11. Expulsion