Album number 5 for the German Agathodaimon and for the umpteenth time we are in front of an album formally and stylistically perfect but without any winning point. Their avant-garde dark metal is something of really complete: a huge variety of styles combined together, black “at the right point”, romantic and melancholic, powerful and atmospheric, modern and really well executed / produced. So what’s the problem? The personality. Nothing of new under the sun, on the contrary... Why should I listen this album if the 50% of the stuff has been already played and arranged in the same way by Arch Enemy or Carcass in the Heartwork era? Maybe because of the other 50%... Wrong answer but let’s talk about it: if you need something of dramatic or epic you have the real Moonspell or the real Vintersorg, if you need something of really black you have thousands of true bands and the same we can say if you need something of modern and catchy. Agathodaimon are in my opinion only incredibly shrewd: they talk about their “natural progression” but, by accident, album after album, they are always on the different waves of the moment. Trendy music for trendy people: nothing more. 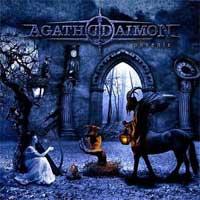