This German bands is in the metalscene for some years now and now delivering their new disc. 9 Tracks of black death metal with gothic and industrial influences. Raw and aggressive vocals, prominent keyboards, up tempo songs and weird guitars. Songs you have to grow into because of the industrial sounds they are creating. That sound is getting annoying to me after some songs. Also the use of the multiple chorus vocals is something I don't prefer in this music. And suddenly at track 5 a ballad song with female vocals. I lost grip from now on and the other songs couldn't save that. 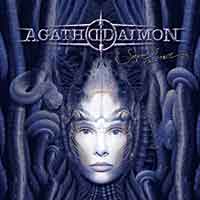