From Finland comes this heavy power metal band called Agonizer. This EP contains 4 songs which are taken from their previous demos. Clear vocals, twin dualling guitars with some leads, keyboards and vivid drums. The songs are played in midtempo and have some tempochanges (like the one in the last song and a short duel between the keys and guitar). Melody is a main issue in the songs and a melody that is catchy, also done by the vocalpatterns. Nice songs but nothing special. 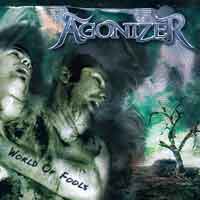 Self released
Reviewer: twansibon
Feb 26, 2009
Next review: Aglarond - Across The Dark Night