Akrotheism – The Law Of Seven Deaths

Music can be seen as a gateway to dimensions where your mind is driven to higher levels of pleasure. Harsh, Gentle, Punishing... A ritualistic adoration of a deity, a tribute to a superior existence.

Music has always served the will of its creator. Through music, many musicians expose the general audience to their beliefs, their ideals - be it good or bad - and, by doing that, new elements are combined to craft new beasts. Arkotheism... black metal is the core of the band's music, to which they add their language. Truth be told, more and more bands have embraced this more orthodox/almost religious like facet of BM, taking hold of one of black metal's core elements, in my opinion: the spiritual self. Black metal has always been a vessel for musical creation, but, associated with that, the relation with the Left Hand Path and non conformative religious free thinking.

“Akrotheism created right after the disbandment of Astral Aeon. They are not a follow up of Astral Aeon, they only share some of the same members.” (in Metal Archives). Akrotheism was formed in 2013, in Greece, and have released 2 splits and 1 full-length. "The Law Of Seven Deaths" was released early this year, through the french (essenntial) label, Osmose Productions, and show a band sailing waters already sailed by many before them, but the end result is above average, easily…

A lot can be extracted from Akrhoteism's music as soon as the mass starts. Shamanic like chantings flow parallel to tribal drumming, guided by earsplitting guitars. Their music is like a powerful and mesmerizing gathering of energies, stolen from the depths of the Netherworld, heavy and pouring rains fall upon each and every one of us as the ceremony takes place. Acherontas and Nightbringer are two bands that come to mind when listening to this release.

Each song is like a chapter from an old manual, instructing you of path one must follow to achieve the pinnacle of his mind's full spiritual power. This album, as well as the band's strength, is a journey through one's spiritual existence, an intense experience, filled with moments of meditation and moments of anger and rage, a quest one must embark with a clear conscience and awareness of the energy. Arkotheism is not only that the musical expression of its musicians, it's a vehicle of spiritual devotion. Join the mass, elevate thy spirit.

There is, present, an enormous sense of melody and of soothing ambiance, softly and almost perfectly entwined with moments of simple and plain violence. This release is the musical painting of a ritualistic – as said before – mindset.

Come forth and face the words of the scribe. An open mind is a receptive spirit… 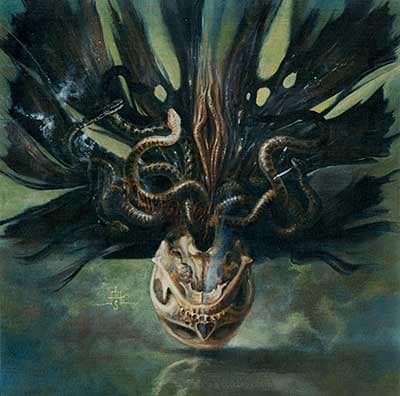