For gamers who love metal, Tim Rowland presents a death metal project that is steeped in gamer lore based on games like Quake, Silent Hill, and even Star Wars (hell, the name Alchemy Of Flesh comes from a Star Wars novel called Dawn Of The Void). While not as blatant and obvious as some other groups go when drawing on gaming influences with World of Warcraft, the mix here is a solid, mid paced crunchy collection of death metal that is definitely 90s influenced from groups like Morbid Angel “Domination” era and especially “The Fathomless Mastery” by Bloodbath. “Abominations” has so many riffs and moments along with the Mikael Akerfeldt inspired vocals that sound right out of earlier Opeth in the vein of “My Arms, Your Hearse,” this is definitely some well crafted stuff. There are the chuggy, yet consistent tracks like ‘Pain Primordial’ which have that mix of Morbid Angel and Hate Eternal ferocity but the drums are rather slow to mid paced so it doesn’t feel like a headache. Then there is the rhythmic ‘House of Earth’ that sounds like ‘Mock the Cross’ from “Fathomless…” so that might cause veteran death metal fans to raise their eyebrows a bit, but it still is a very solid track. Then there are the slower, almost doomier pieces like ‘Lobsel Vith’ with its rumbling bass sections and darker riffs that will haunt listeners. Fans should know this is not really the kind of death metal that just goes full force like Deicide or Cannibal Corpse, but for the oozing, seeping kind that isn’t quite reverb drenched like in the vein of Gatecreeper or Dismember.

As the album progresses listeners will notice the tracks do tend to run together a bit. Alchemy Of Flesh does tend to rely on a lot of the same riffs and paces to get the message across, so when hearing pieces like ‘Slipgates To Annihilation’ or ‘Sleeping Chaos’ it can be hard to differentiate the tracks. Rowland could have added a few more variations here and there be it more grim bass interludes, slow, drawn out doom passages, or even progressive single notes, but overall the album starts to feel like one long track after a while. There are a few surprises here and there like ‘Fiamma Nera Rites’ which has some more percussive thunder drums and almost some groove moments in the riffs that don’t just seamlessly run together like they do on some of the earlier tracks. Again, riffs are a little repetitive, but they stand out based upon their tone. At least one thing that never wavers is the vocals which stay consistent all the way through, so Rowland definitely has that mastered. One usually can be very impressed for the kind of output a 1 man band can create on this level.

As far as the closer ‘Opener Of The Way’ Alchemy Of Flesh give fans the excellent outro. Slow, plodding, and doom laden this piece sludges along with grim determination, much in the way Morbid Angel closed “Domination” with ‘Hatework,’ minus the atmospheric bells. While ‘Opener…’ lacks the punch of the rest of the album, it really lets the vocals work to Rowland’s advantage and lets listeners focus on them specifically as opposed to the riffs and drums. They sound monstrous, evil, and just that right kind of death metal where they can be understood. Fans might feel the track drags a bit, but it definitely leaves its mark. As a result, the whole album “Ageless Abominations” is a force to be reckoned with for new and more seasoned death metal fans. The music crushes in its own way but still leaves a burning mark on the ears versus feeling like a roller coaster ride that went too fast. Rowland should be proud of the work he’s done here as it is definitely an impressive metal feat with few flaws. 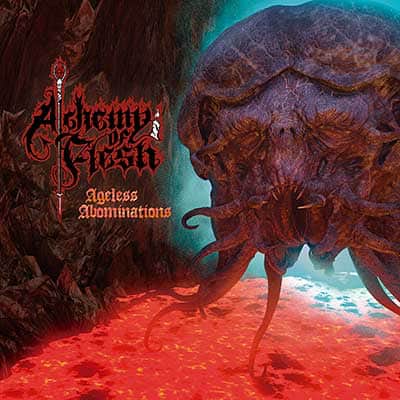