Alkoholizer are a thrash metal band from Italy born to create down and dirty music in the vein of Slayer, Metallica, and Darkthrone. Expect a lot of chord riffs here with simple drumming and vocals that sound like a Slayer project in conjunction with Children of Bodom. Sadly, Drunk or Dead doesn't really live up to either of these titans. The music is catchy, but for some reason can't be taken seriously. Considering that all the musical structure sounds like it was taken from the Slayer album, God Hates It All, it's very had to view Alkoholizer as their own entity or just pure Slayer worship. The drumming, the guitars, even the vocals all mirror that of Slayer with a few Metallica solos and the recent punk-biting lyrics that Darkthrone have come up with. This is one of those albums where once you listen to one song, you've pretty much heard them all.

Sure there's a few good solos here and there, like on "Age of Misery" and "Resuscitate," but its mostly just a thrash hook filled album with songs that either reflect violence or poorly directed humor. Many of the songs are brief due to uninspiring beginnings, such as the likes of "Sick Orthopedic." Half the song is wasted on a muddled introduction of someone saying something amongst doing something else (either puking or dying). While it's a creepy intro, it doesn't really have a good effect for thrash metal where fans expect things more in your face, with a bit of varaition. Hence, pitfall number two. A lot of Alkohoilzer's songs sound the same and whatever enjoyable rock riffs is heard on the opening track is lost upon the listener. Basically, it's like a bad porno. Sure, people like watching sex, but eventually after about five minutes of seeing someone done missionary style, they're going to want a change in positions or turn the whole thing off. Drunk or Dead might have been a lot better had the band thrown in some variation in musical structure between songs, something their apparent Gods Slayer and Metallica learned to do in order to have more creative albums.

Alkoholizer may seem inspring and awesome at first, but listeners may feel it fall short once it starts getting repetitive. In a world where there's a lot of copycat bands, Alkoholizer has certainly become one of them. Sure, it sounds like they're trying to bring back the early days of thrash where things were gritty, riff inspired fun and being repetitively catchy was the name of the game, but now apparently the times have called for something more. If you don't mind crunchy, catchy songs that sound all the same with monotone-scream vocals that sound like a much more mature band you probably already have, then go ahead and give this a shot. However, if you're like the other half of the field who would take that more mature band and spin their discs a hundred times over a band that sounds just like them but falls short in the way of playing to their level, ignore Drunk or Dead for now. Perhaps the next album will be better and more varied while still maintaining that gritty thrash sound. 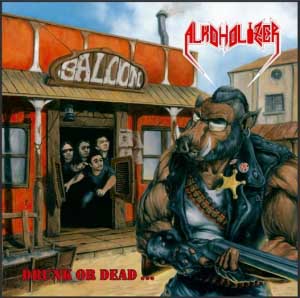