Alvater spawned their music out of Germany in 2009 with their debut, "Chroniken". Just from the looks of the cover art one can tell it's going to be one of those folk epic black metal albums that hopefully aren't too cheesy. Fortunately, "Chroniken" isn't cheesy at all (despite the overuse of keyboards on every track), but it isn't exactly epic. Clocking under a half hour the songs can seem rushed and tied down without letting loose that grand epic feeling that a lot of folk black metal can give off.

The folk metal atmosphere is certainly with Alvater's debut as the haunting keyboards dominate every track. Sometimes they are ominous like on "Shreckenssteppe" or a bit more jazzy and progressive like on the brief instrumental "Kindheit," but all in all they certainly set the folk mood. There's even some trumpet sections and female vocals on the last track that really set the tone. Unfortunately, these folk elements seem to overtake the more 'black metal' side of the album. Sure listeners can hear the guitars hammer away in melodic riffs with the drums pounding clearly while the vocals snarl out a tale in the band's native language, but there is still something to be left desired.

By far the most 'metal' track is "Altestenrat" with some really great rocking riffs that complement the keyboards and other folk instruments, but it is a war of attrition with the keyboards getting a lot more of the spotlight than the drums. Vocals are a raspy, crackling growl that thankfully isn't annoying, but the crackling may ruin the quality of the other instruments when fans try to listen. Other tracks like "Juniper" are much more chaotic and less melodic with the guitars and sound more like something Emperor would try to do, but on a much less grander scale. The drums on this track have more a thunderous beat to them compared to just sounding like regular black metal drums being worked at the kit which enhances the folk atmosphere of creating something close to 'battle metal.' It isn't exactly Turisas, but it comes close.

Sadly, all the songs are a few minutes shorter than they should be. The folk elements are done very well on "Chroniken", but they don't always enhance the other parts of the music. A lot of times the keyboards sound too calming to match the ferocity of the guitars and vocals; a more gradual bridge between the soft and heavy parts would have been fantastic with the use of the guitars rather than just "metal chord chord chord-soft keyboards-suddenly metal chord chord chord again." It goes down the earhole like a two bad shots mixed together. However, folk metal fans along the lines of Agalloch and Korpiklaani will probably find a place in their black metal hearts to take this album in. 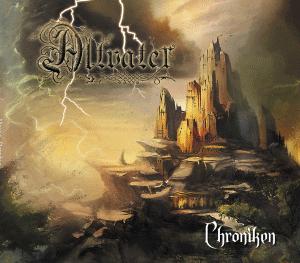