An Unction In Braille - The Wordless Whisper

This deathcore quintet from Springfield, Massachusetts have released their debut EP, and it's only taken them nine years. Worth the wait? Probably. But also a difficult topic to digest in general. The EP contains five tracks and clocks in at a short total of sixteen minutes. With no idea or references to why it's taken so long to record and release something, we can only pray this is enough to keep the band active furthermore and hopefully step up their game with a future EP or album.

'Sickening Sweet' is the EP's stand-out song and it's got a clean-sung chorus in the veins of Killswitch Engage / mid 2000's metalcore. Whilst it's plainly obvious the band are way to late to the table with this offering, it's also fairly refreshing to hear modern bands attempt the sound that made metal fans fall in love with these genres when they first blended into the underground music scene. Labelled as deathcore, but definitely more to them than that as An Unction In Braille follow massive melodic riffs that August Burns Red and Misery Signals would be proud to call their own. With a ferocious raspy vocal style that is almost never-ending, this typically becomes the EP's highlight alongside the bone-crunching MySpace styled breakdowns to snap your neck to.

Overall, the EP is far too short. I feel like I still don't know what An Unction In Braille have to offer, but I think it's 100% more than what is welcomed on this brief record. That's not to say this is shite, there's so much nostalgia and good production on these few minutes to make you want to relive the first days you heard bands like Still Remains or I Killed The Prom Queen. Definitely pushing in more core directions than anything else, the band are passionate and clearly had fun idolizing the heavier side of metalcore and the melodic side of deathcore and there's absolutely nothing wrong with that. 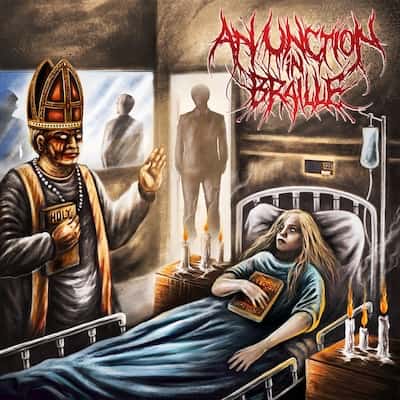 Self released
Reviewer: Max James
Jan 31, 2022
Next review: Jugulator - Under The Verdict