Varberg, Sweden's Anata have existed since 1993, recorded their first demo in '95 and have been releasing albums since '98. The Conductor's Departure, their fourth full-length, is a convincing example of death metal's potential to mix brutality, melody and dexterity. With plenty of intricate riffs, unexpected time changes and clean production, much of this CD carries death metal info the musical territory dominated by Amorphis and Opeth. The musicianship is tight and leaves little margin for error. 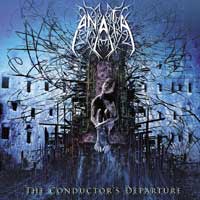