Antares Predator - Twilight Of The Apocalypse

Antares Predator have created a sci fi world with a strong Terminator influence based upon the album cover of their first, full length debut, Twilight Of The Apocalypse. It's a blend of death metal, black metal, and melodic thrash metal, with some great hooks, harsh vocals, and nothing cheesy or really base standard at all. There is a lot of varied guitar work here in the sense that no song chugs or picks the same riff twice and each note is played in a very catchy fashion. The vocals are in the screaming fashion one would hear from a melodic death metal band like At The Gates or Soilwork; raw, not too deep, but not high pitched and annoying like a lot of deathcore bands can produce.  The drumming generally keeps right in step with the guitars, but when listeners can hear them they display some skill and don't sound like it was done on a machine kit.

"Downfall" opens up sounding like some metalcore band, but eventually it's clear that Antares Predator are more than that. The riffs go off like machine gun bursts, but they are still catchy. There even sounds to be some schizophrenic keyboard moments, or perhaps it is the other guitars. "BBQ" won't be the first song to make heads turn on the album as the musical style here is very different in how the riffs have a much more progressive rock feel to them. "As Dragons Roam" is one of the more epic tracks for the symphonic mid section, but it's also one of the fastest and sounds a lot like speed thrash metal. Vocals are top notch in this. "Sacrament" turns things back into the slower, prog rock and thrash style, and the vocals take on a more emotional scream. "Orion" holds a creepy beginning before opening into heavier, more recognizable thrash metal music. The drums are heavy hitting and very black metalesque. "Through The Deep" again has some symphonic elements and "Death" is a noisy, gritty, yet melodic instrumental that is a perfect finishing touch to the album.

While some of the lyrics and song titles may not seem to follow the Terminator franchise so directly as some bands like Austrian Death Machine do, it is obvious that Antares Predator have a strong apocalyptic vision within their work. Twilight Of The Apocalypse is a huge step up from their last EP, which was meteokre at best. Fans of most melodic death metal bands like Darkane, Soilwork, or anything that entails the sci fi world without coming off as too electronic but still heavy as hell will enjoy this band a lot. 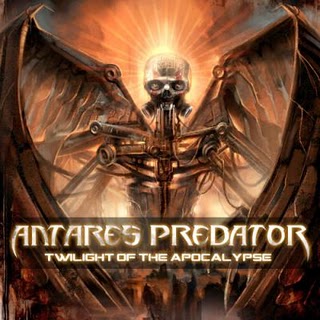