Sweden’s Antichrist have gained a healthy cult following of late, their demos were re-issued, and now with a surprising logo change, Antichrist have a new album out that thrashes like the genre used too in its infancy. With this I mean comparisons can be drawn to other seminal debut releases such as ‘Bonded by Blood’ and ‘Show No Mercy’. Antichrist has the ability to arrange songs with meaning and they can actually play their instruments, something that is lost on some of these retro “raw” bands of the last few years. ‘Torment in Hell’ (a re-recording from their ‘Crushing Metal Tape’ demo) and ‘Sign of the Beast’ (a re-recording from their ‘Put to Death’ demo) are lifted in life from their original state. Opener ‘Dark Sorcery’ has the balls out approach that becomes the main synopsis of this entire release.

Whilst being brash and fast, and competent, you won’t find any ingenious bouts of originality, but what you do hear is particularly pleasing and always with a deft precision. Antichrist are good enough to be included as one of Fenriz’s “bands of the week”, whether you care about that or not is another thing all together, but in essence, there is quality thrash metal a-foot. ‘Forbidden World’ takes you back to the infantile days of thrash metal, taking inspiration from both the US and EU scenes, ‘Forbidden World’ is a stunning thrash statement and worthy of your time and money. 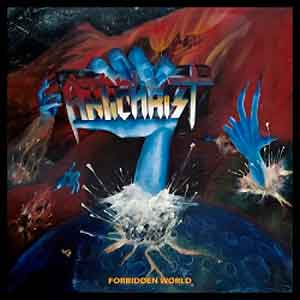