Split with 3 Polish grindcore bands of which Antigama is the best known for me. Third Degree is new and Herman Rarebell I only know as the drummer of the German band Scorpions. Does the real Herman actual know about this???

Antigama delivers 6 brand new tracks and still playing fast controlled grind with brutal vocals and thick guitarsound. Third Degree is around since 1997. This is their latest recordings and done in the Napalm Death style. Fast grindcore with balls. Herman Rarebell plays some ultra fast grindcore in short songs. So expect intense and raw propaganda with unpolished vokills. Again a good release from Selfmadegod. 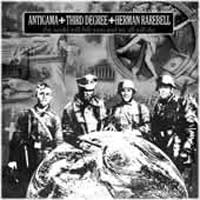 7. Badpants
8. The tolerance
9. Awareness
10. Fill the rest yourself