"Humanimals" wastes no time in getting into the action – the opening track 'Binary Extraction' is an in-your-face, anti-human, robotic manifesto. This is followed by 'Digital Damnation', 2:13 of pounding guitars, vocals from hell, and drums that blast like artillery. I have to give credit to Tat0 for hitting both highs and lows, not just in this track but throughout the album.

Following 'Digital Damnation', we have 'Integers' and 'Industrial Exorcism'. 'Integers' is by no means a bad song, but 'Digital Damnation' is my favorite track on the album. 'Industrial Exorcism' is 1:48 of masterful instrumentalism. The vocals on this track aren’t particularly better than the rest of the album, but drums, guitar, and bass will show you just what Tat0 and Kuhn are made of. For one last song example, I’ll talk about 'Inorganic Population' – at just over 4 minutes, it's one of the longest songs on the album. This track has a slow buildup into a fairly quick-paced song with a few well-timed slowdowns. This track, while not my favorite, also shows off the musicianship of Tat0 and Kuhn very well.

Its not bad by any means, and shows promising musicianship, but it gets stale about half-way through. The first couple songs, I felt this was a 4-4.5/5, but the album just loses its momentum. That said, it's definitely an album worth checking out, and maybe throwing a few songs into a playlist, and I look forward to more from Antipathic. 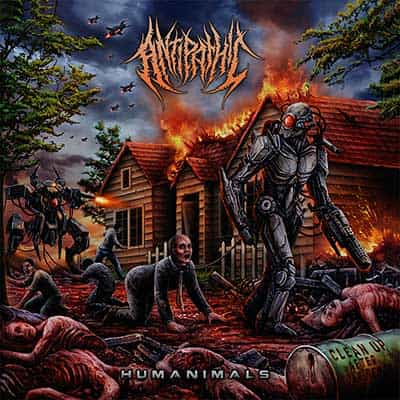