Dying For Life is their second album. Their debut was released on Lance King's Nightmare Records and it helped the band a lot. Antithesis plays refreshing old school US metal in the vein of Fates Warning, Hades, Armored Saint. You can hear they all have a lot of musical experience. Great guitar leads in the songs and well built climax. Variety on the songs. It starts with two uptempo songs and then it slows down to semi ballads. At the end you still have a feeling that you missed something. In my case I missed the power from the first two songs. 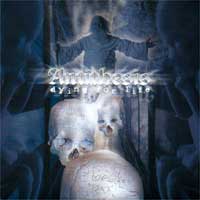